We're going to take a look at building a simple desktop application using JavaFX, Couchbase Lite, and even Couchbase Sync Gateway to synchronize this data between computers.

There are a few requirements that must be met in order to make this project successful.

This project will use Maven to gather our dependencies and build a JAR file. While Sync Gateway isn't truly a requirement, it is if you wish to add synchronization support to your application.

We need to create a basic Maven project. This can be done in an IDE of your choice, or it can be done manually. Essentially what we'll need is the following file and directory structure:

We'll get into the specifics of what each file contains when we start developing. For now we need to set up our Maven pom.xml file so it will obtain the necessary dependencies.

Open the project's pom.xml file and include the following:

Without going into too much unnecessary detail in the above Maven file, we want to pay attention to a few things in particular.

The above dependency says we are including Couchbase Lite into our project. Remember, Couchbase Lite is a local database that does not sit on a server somewhere. The data is stored locally and the component is bundled within your application.

We also want to pay attention to the following plugin:

The above plugin is for creating a JavaFX project. Of course this project creation is a lot easier when using an IDE like IntelliJ, even though it isn't required.

Before we get invested in creating the UI and controllers for our JavaFX project, let's worry about how data is going to be handled.

For simplicity, it is a great idea to create a singleton class for managing the data throughout our project. It also works quite well when setting up data listeners to prevent having to write queries everywhere in the application. Let's go ahead and open the project's src/main/java/com/couchbase/CouchbaseSingleton.java file and include the following code. We'll break it down after.

The above was a lot to take in, but it was necessary in order to avoid confusion.

Inside the CouchbaseSingleton class there are four private variables. The database manager will allow us to open our database as well as create it. The replication objects are responsible for synchronization in either direction.

In the constructor method we create and open a database called fx-project and configure a view that we'll use when it comes to querying for data. This view called todos will emit a key-value pair of document id and document for every document that is stored in the local database. The constructor method is private because we instantiate it through the static method getInstance.

While we won't be looking at synchronization until later in the guide, it is a good idea to lay the foundation. Essentially we just want to define that we'll have continuous replication to and from a particular sync gateway URL. We also want to be able to stop replication when the application closes. This brings us to our methods for saving and loading data.

Our save method will take a Todo object and save it into the database. The result of which will be a Todo object that contains the document id that gets returned to the calling method. This Todo class is simple. It accepts basic information like id, title, and description, and has the appropriate getter and setter methods that match. For reference, it looks like the following and exists in the project's src/main/java/com/couchbase/Todo.java file.

This leaves us with our last data related function, the query function.

Remember that view that we created? This time we're querying it. The result set will be loaded into an array of Todo objects. This brings our data layer to a close, allowing us to focus on the actual application development.

While not required, the JavaFX application, SceneBuilder, makes it very simple to create a graphical UI and corresponding controller class. If you choose not to use it, open your project's src/main/resources/TodoFX.fxml and include the following XML markup:

The above markup will give us a UI that looks like the following: 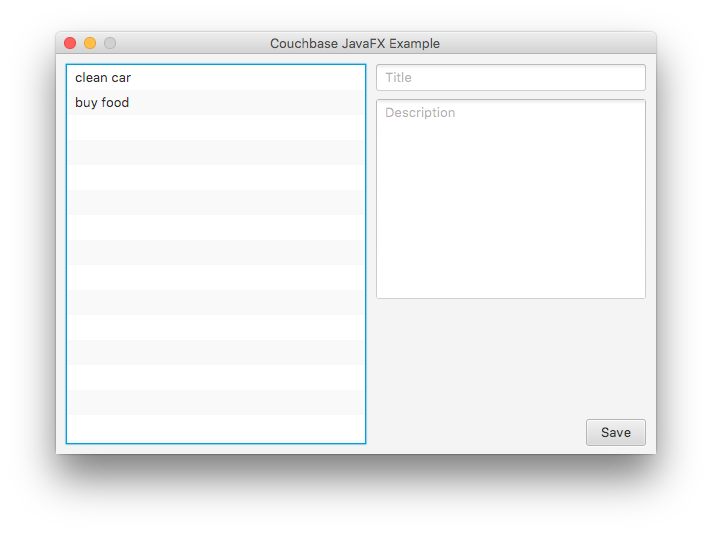 Nothing too fancy in the above, correct?

We have a simple UI with a list, two input fields, and a save button, as described in the XML markup. In the markup we also reference com.couchbase.TodoFXController. This is the logic that will be bound to the particular FX view. Open the project's src/main/java/com/couchbase/TodoFXController.java and include the following:

There is a lot to take in when it comes to the above code, so we're going to break it down.

Remember the FXML file? Each of the above variables are mapped to the components of that file. However, what we really care about is the use of the Initializable interface that we're implementing. This requires an initialize function where we'll setup our component and database listeners.

Because we're using a custom Todo class in our list, we need to configure how the list rows show data. By default they are strings, but we actually want to extract the title of any of our data elements and show that instead.

In the above we are obtaining the open database instance, performing a query, and adding all the data to the FX list that is on the screen. This is a one time thing that is done when the application loads. All future data loads are done through a data listener.

Finally we have our save button that has its own click event. If clicked, and the input elements are populated, save the data to the database.

As of right now, we have an offline desktop application that saves data in Couchbase Lite. Now we can worry about data synchronization / replication.

Synchronizing Data Between Desktop and Server

The next part is easy thanks to Couchbase Mobile. You will need Couchbase Sync Gateway up and running before we start messing with the desktop application code. With Sync Gateway installed, create the following basic configuration file:

The above configuration file is pretty much as basic as you can get. Create an fx-project partition with no read / write rules using the in-memory database. Note we're not using Couchbase Server here, but we could. Run this configuration file with Sync Gateway.

Bouncing back into the JavaFX application. Open the project's src/main/java/com/couchbase/Main.java file and include the following:

The above should be included in the start method. It will start the bi-directional replication process to our now running Sync Gateway instance.

You just saw how to create a simple JavaFX application that stores data in Couchbase Lite and synchronizes the data. To run this application using Maven and the command line, execute the following:

Because Couchbase is so flexible, this same application can be extended to mobile with very few changes to the application code. If you'd like to download the full project in this guide, it can be found on GitHub here.