This blog post will explain how to create and scale a Couchbase Cluster using full armor of Docker – Docker Machine, Docker Swarm and Docker Compose. Here is what we’ll do: Provision a Swarm cluster with Docker Machine provide more details about why and what’s done in this script. Here is a summary:

Compose file uses host network. This is equivalent to using --net=host on docker run CLI. It allows the container to use the host networking stack. It also limits only a single Couchbase container to run on
a single Docker Machine. So this means that our Couchbase cluster can scale based upon the number of Docker Machines – 3 in our case. The exact command to use this Compose file is:

There are three nodes in the Docker Swarm cluster. The default scheduler strategy is spread and so the containers will be spread on different hosts. This is evident
by docker ps:

If you have jq installed then IP address can be conveniently found as:

All Couchbase server nodes are created equal. This allows the Couchbase cluster to truly scale horizontally to meet your growing application demands. Independently running Couchbase nodes can be added to a cluster by invoking the server-add CLI command. This is typically a two step process. The first step is adding one or more nodes. The second step then rebalances the cluster where the data on the existing nodes is rebalanced across the updated cluster. In our case, a single Couchbase
container is running on each Docker Machine. Lets pick IP address of any one Couchbase node, and add IP address of the other node:

Couchbase Web Console for both the nodes will show a similar output: 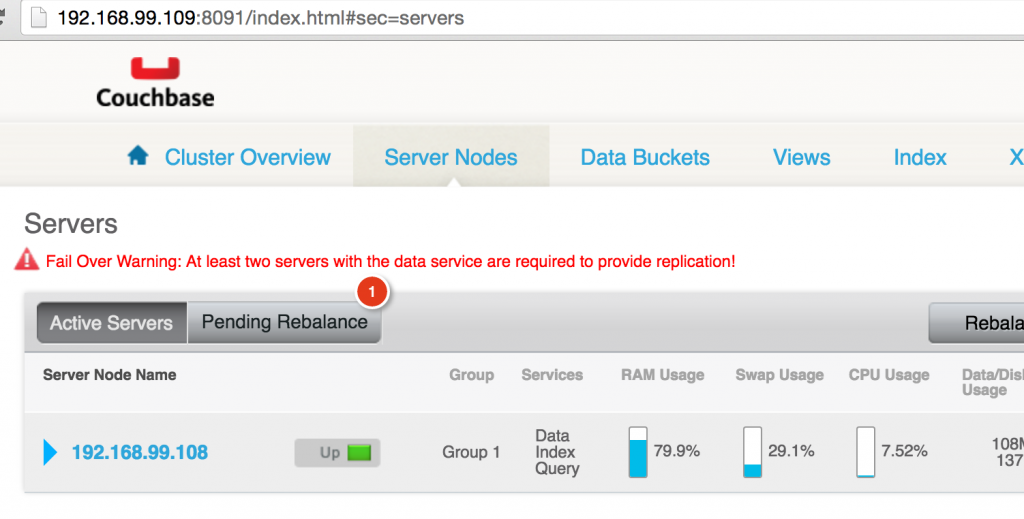 This shows that the two nodes now form a cluster, and needs to be rebalanced.

Couchbase Web Console will be updated to show that rebalance is happening:

Check that the container is running on a different Docker Machine:

As mentioned earlier, scaling a Couchbase cluster is a two-step process. This is so because typically you’ll add multiple servers and then rebalance the cluster. However, in cases where you only need to add a single Couchbase node and then rebalance,
the rebalance command can be used achieve that. In our case, this is done as shown:

This blog showed how you can easily create and scale a Couchbase Cluster using Docker Swarm, Machine and Compose. Enjoy! Further reading …