Augment your Sync Function with Roles in Couchbase Sync Gateway

Roles in Sync Gateway are often overlooked because they seem more complex to use than Users and Channels. However, they provide one additional layer of abstraction and can greatly simplify your data model. Take the example of an application to share reviews of restaurants by city. Different users could have different privileges such as moderators and guest users. In this tutorial, you will configure the Sync Function to allow authenticated users of such an application to approve, post reviews or assign roles to other users.

In total, there will be 3 types of roles in the application:

You will find the Sync Gateway binary in the bin folder and examples of configuration files in the examples folder. Copy the users-role.json file to the root of your project:

In the next section, you will update the configuration file to create users and roles.

In sync-gateway-config.json, update the db object to read:

A couple of things are happening above:

The easiest way to create roles is in the configuration file as you did above.

Another way to create roles is through the admin REST API. Provided that you expose an endpoint to create those roles from the application, you can create roles dynamically by sending a request to your app server (blue arrows) which will create the role and send back a 201 Created if it was successful (green arrows). 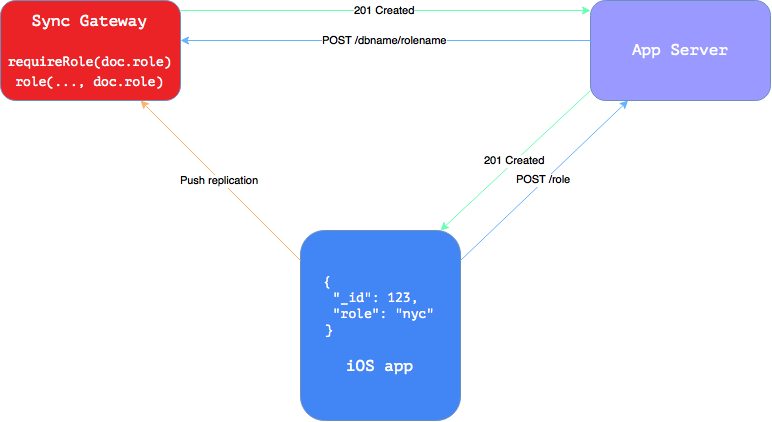 In the next section, you will add the Sync Function to handle write and read operations for the three different types of documents (restaurant, review, profile).

Roles and users can both be granted access to channels. Users can be granted roles, and inherit any channel access for those roles.

Read and write access to documents are independent. In fact write access is entirely governed by your sync function: unless the sync function rejects the revision, a client can modify any document. All the require* functions act as validators but also write access APIs.

It’s very common to see sync function creating lots and lots of channels. This is absolutely fine. However, it can get cumbersome to assign each user in turn to a channel. Instead you can use a role!

Let this sink in one more time, users can be granted roles and inherit any channel access for those roles.

This means you can grant a user access to multiple channels by simply assigning a role. This is very powerful because you don’t need to assign every single user to a channel. You simply grant the role access to the channel and assign the users to the role.

With that in mind, replace the sync function in sync-gateway-config.json:

In this example, you are utilising the 3 main features of roles:

Now you can test the Sync Function behaves as expected with the following HTTP requests.

Documents of type review created by a level-1 user: the document should go in the {user_name}-in-review channel and the users with the level-3 role should have access to this channel too.

Login as the user jens:

Save a new document of type review (substitute the token with the one returned in the Set-Cookie header above):

You can also view the channels this document belongs to and roles/users that have access to it in the Documents tab: 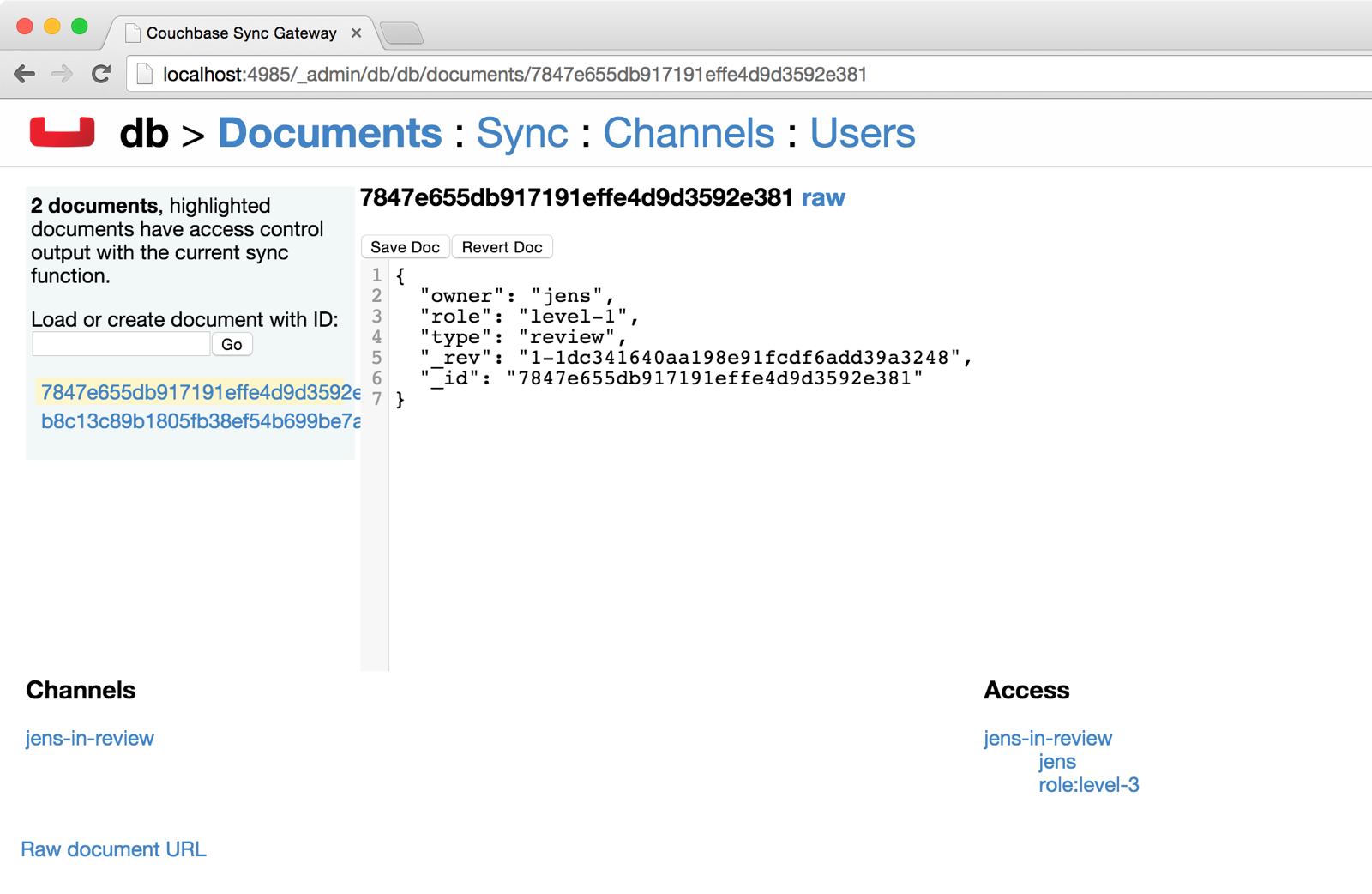 Login as andy and replace the token with the one you got back from the login request. 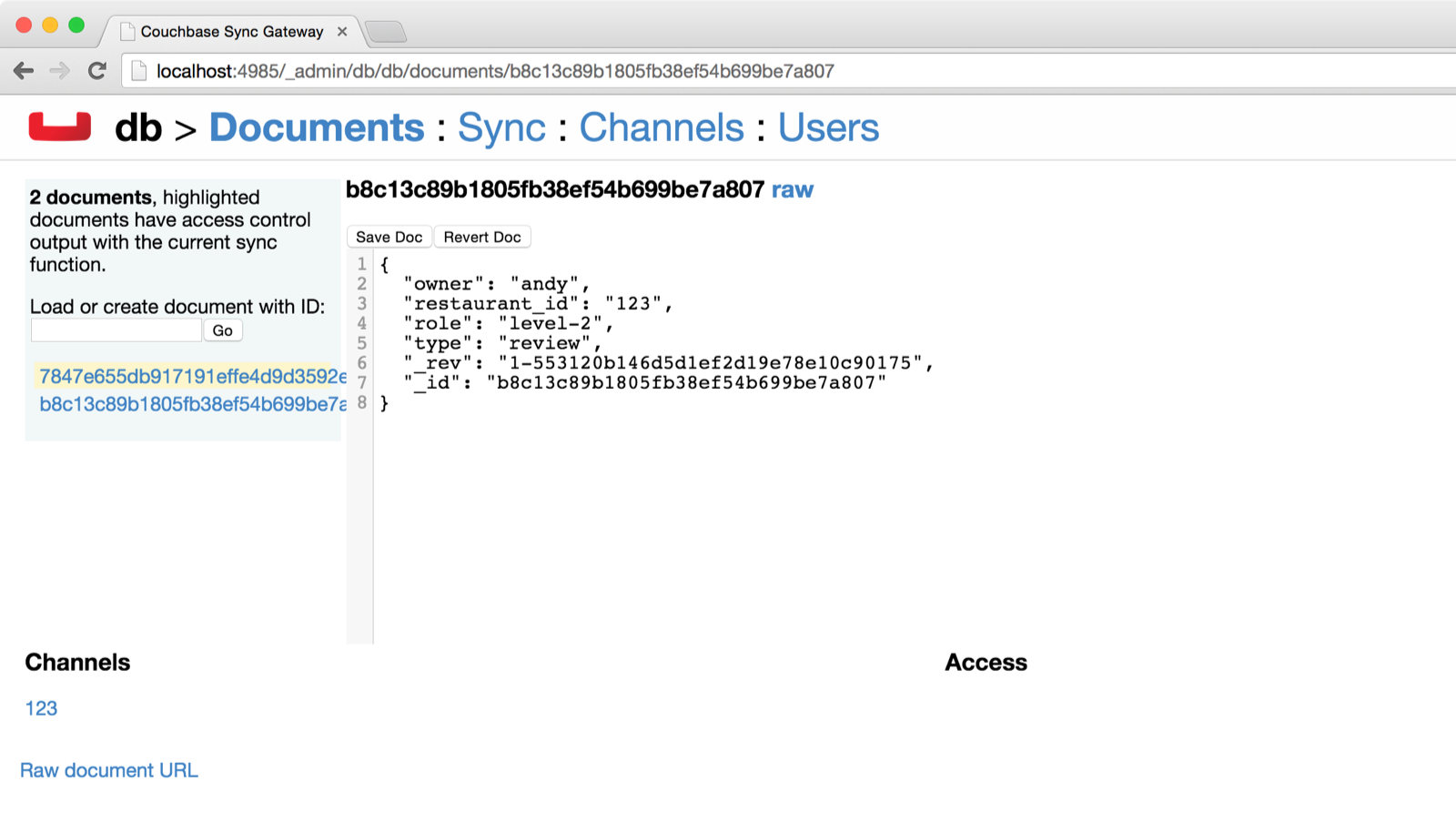 Assigning a role to a user.

Login as traun and replace the token with the one you got back from the login request.

In this tutorial, you learnt how to use channels and requireRole to dynamically validate and perform write operations. You also assigned multiple channels at once to multiple users using the role API.