What is a Serverless Architecture?

Serverless architecture runs custom code in ephemeral containers that are fully managed by a 3rd party. The custom code is typically a small part of a complete application. It is also called as function. This gives another name for serverless architecture as Function as a Service (FaaS). The container is ephemeral because it may only last for one invocation. The container may be reused but that’s not something you can rely upon. As a developer, you upload the code to FaaS platform, the service then handles all the capacity, scaling, patching and administration of the infrastructure to run your code.

Serverless Architectures explain the difference between the classical programming model and this new serverless architecture. With a FaaS platform your application is divided into multiple functions. Each function is deployed in FaaS. The service spins up additional compute instances to meet the scalability demands of your application. FaaS platforms provides the execution environment and takes care of starting and tearing down the containers to run your function.

Read Serverless Architectures for more details about these images. One of the big advantages of FaaS is that you are only charged for the compute time, i.e. the time your code is running. There is no charge when your code is not running. How are Functions different from VMs and Containers? Note that Linux containers instead of Docker containers are used as an implementation for AWS Lambda.

How is FaaS Different From PaaS?

As quoted at Serverless Architectures, a quick answer is provided by the following tweet:

If your PaaS can efficiently start instances in 20ms that run for half a second, then call it serverless. https://t.co/S3YzvqFYLR

In other words most PaaS applications are not geared towards bringing entire applications up and down for every request, whereas FaaS platforms do exactly this. Abstracting the Back-end with FaaS explain the difference with different *aaS offerings. The image from the blog is captured below:

Serverless Architectures also provide great details about what FaaS is and is not. AWS Lambda, Google Cloud Functions and Azure Functions are some of the options for running serverless applications. This blog will show how to write your first AWS Lambda function.

What is AWS Lambda?

AWS Lambda is a FaaS service from Amazon Web Services. It runs your code on a high-availability compute infrastructure and performs all of the administration of the compute resources, including server and operating system maintenance, capacity provisioning and automatic scaling, code monitoring and logging. AWS Lambda charges you for the duration your code runs in increments of 100ms. There is no cost associated with storing the Lambda function in AWS.

First million requests per month are free and the pricing after that is nominal. Read more details on Lambda pricing. It also provides visibility into performance by providing real time metrics and logs to AWS CloudWatch. All you need to do is write the code! Here is a quick introduction:

The code you run on AWS Lambda is called a Lambda Function. You upload your code as a zip file or design it using the AWS Lambda Management Console. There is a built-in support for AWS SDK and this simplifies the ability to call other AWS services. In short, Lambda is scalable, serverless, compute in the cloud. AWS Lambda provides several execution environments:

This blog will show how to:

The complete code in this blog is available at github.com/arun-gupta/serverless/tree/master/aws/hellocouchbase.

First, let’s look at a Java application that will be used for this Lambda function. Programming Model for Lambda Functions in Java provide more details about how to write your Lambda function code in Java. Our Lambda function will implemented the pre-defined interface com.amazonaws.services.lambda.runtime.RequestHandler. The code looks like:

The bucket name is serverless and all JSON documents are stored in this. A simple Hello World application may be used for creating this function as well.

More details about Maven configuration are available in Creating a .jar Deployment Package Using Maven without any IDE. The maven-shade-plugin allows you to create an uber-jar including all the dependencies. The shade goal is tied to the package phase. So the mvn package command will generate a single deployment jar. Package the application using the mvn package command. This will show the output:

The target/hello-couchbase-1.0-SNAPSHOT.jar is the shaded jar that will be deployed to AWS Lambda. More details about creating a deployment package are at Creating a Deployment Package.

Create an AWS Lambda Function using AWS CLI. The CLI command in this case looks like: 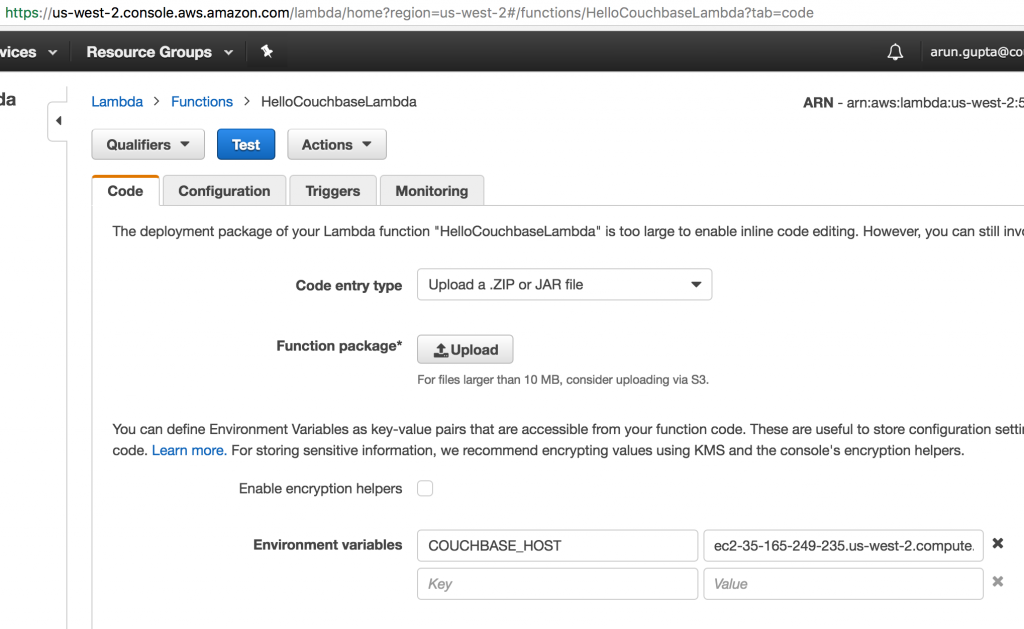 The output from the command is stored in hellocouchbase.out and looks like:

Invoking this function stores a JSON document in Couchbase. Documents stored in Couchbase can be seen using the Couchbase Web Console. The username is Administrator and the password is the EC2 instance id. All data buckets in this Couchbase instance are shown below:

Note that the serverless bucket is manually created. Clicking on Documents shows details of different documents stored in the bucket:

Clicking on each document shows more details about the JSON document: 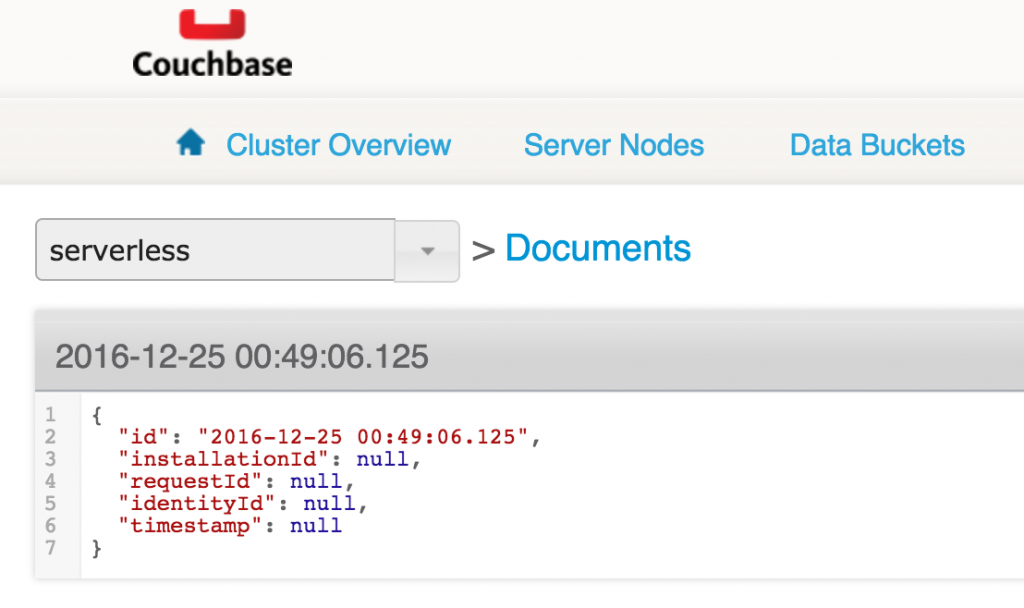 Lambda function can also be tested using the Console:

If the application logic changes then a new deployment package needs to be uploaded for the Lambda function. In this case, mvn package will create a deployment package and aws lambda CLI command is used to update the function code:

The function can then be invoked again. During the writing of this blog, this was often used to debug the function as well. This is because Lambda functions do not have any state or box associated with them. And so you cannot log in to a box to check out if the function did not deploy correctly. You can certainly use CloudWatch log statements once the function is working.