Joyent has recently announced their new Triton Docker container hosting service. There are several advantages of running Docker containers on Triton rather than on a more traditional cloud hosting platform:

For more details, check out Bryan Cantrill’s talk about Docker and the Future of Containers in Production.

Let’s give it a spin with a “hello world” container, and then with a cluster of Couchbase servers.

You will also need to add your SSH key to your account.

Upgrade Docker client to 1.4.1 or later

Check your version of Docker with:

If you are on a version before 1.4.1 (like I was), you can upgrade Docker via the boot2docker installers.

Run the command and you should see the following output:

As the output above suggests, copy and paste the commands from the output. Here’s an example of what that will look like (but you should copy and paste from your command output, not the snippet below):

Remember, you’re running the Docker client on your workstation, not in the cloud. Here’s an overview on what’s going to be happening: 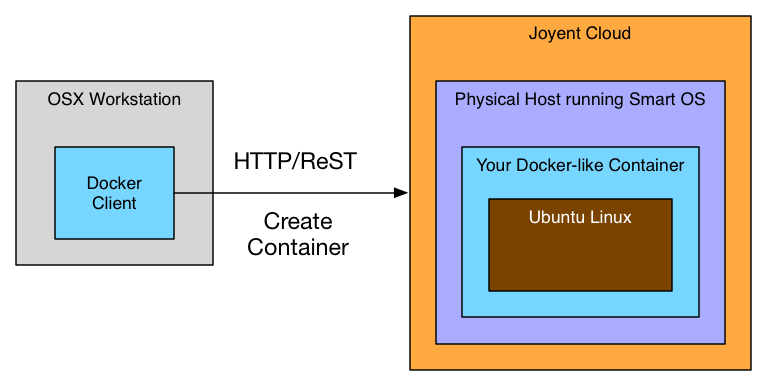 To start the docker container::

You should see the following output:

Also, since the --rm flag was passed, the container will have been removed after exiting. You can verify this by running docker ps -a. This is important because stopped containers incur charges on Joyent.

To confirm the containers are up, run:

and you should see:

At this point you will have environment variables defined with the container ids of each container. You can check this by running:

Get public ip addresses of the containers

Each container will have two IP addresses assigned:

To get the public IP, we can use the Docker client. (to get the private IP, you need to use the Joyent SmartDataCenter tools, which is described below)

You will now have the public IP addresses of each container defined in environment variables. You can check that it worked via:

Open your browser to $container_1_ip:8091 and you should see the Couchbase welcome screen: 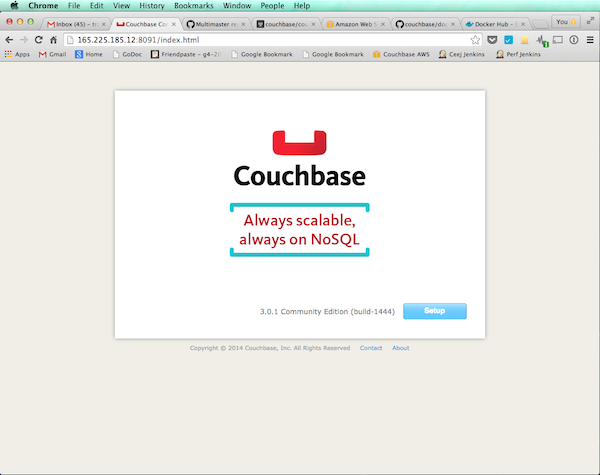 At this point, it’s possible to set up the cluster by going to each Couchbase node’s Web UI and following the Setup Wizard. However, in case you want to automate this in the future, let’s do this over the command line instead.

Let’s arbitrarily pick container_1 as the first node in the cluster. This node is special in the sense that other nodes will join it.

The following command performs these operations:

Note: the -u admin -p password should be left as-is, since that is just passing in the default admin name and password for auth purposes.

A bucket is equivalent to a database in typical RDMS systems.

Add in the second Couchbase node with this command

To verify it was added, run:

which should return the list of Couchbase Server nodes that are now part of the cluster:

In this step we will:

If you see SUCCESS, then it worked. (I’m not sure why the “close failed in file ..” error is happening, but so far it appears that it can be safely ignored.)

Open your browser to $container_1_ip:8091 and you should see the Coucbase log in screen:

And you should see the Couchbase nodes: 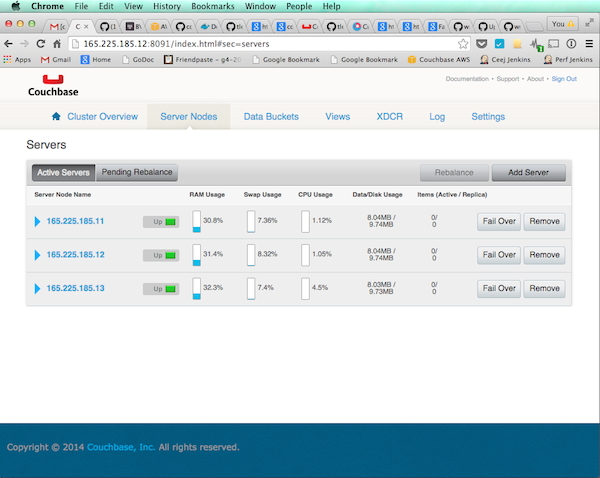 Congratulations! You have a Couchbase Server cluster up and running on Joyent Triton.

To stop and remove your Couchbase server containers, run:

To double check that you no longer have any containers running or in the stopped state, run docker ps -a and you should see an empty list.

Installing the Joyent Smart Data Center (SDC) tools will allow you to gain more visibility into your container cluster – for example being able to view the internal IP of each continer.

Here’s how to install the sdc-tools suite.