Docker 1.12 introduced Services. A replicated, distributed and load balanced service can be easily created using docker service create command. A “desired state” of the application, such as run 3 containers of Couchbase, is provided and the self-healing Docker engine ensures that that many containers are running in the cluster. If a container goes down, another container is started.
If a node goes down, containers on that node are started on a different node. This blog will show how to setup a Couchbase cluster using Docker Services. Many thanks to @marcosnils, another fellow Docker Captain,
to help me debug the networking!

A cluster of Couchbase Servers is typically deployed on commodity servers. Couchbase Server has a peer-to-peer topology where all the nodes are equal and communicate to each other on demand. There is no concept of master nodes, slave nodes, config nodes,
name nodes, head nodes, etc, and all the software loaded on each node is identical. It allows the nodes to be added or removed without considering their “type”. This model works particularly well with cloud infrastructure in general. 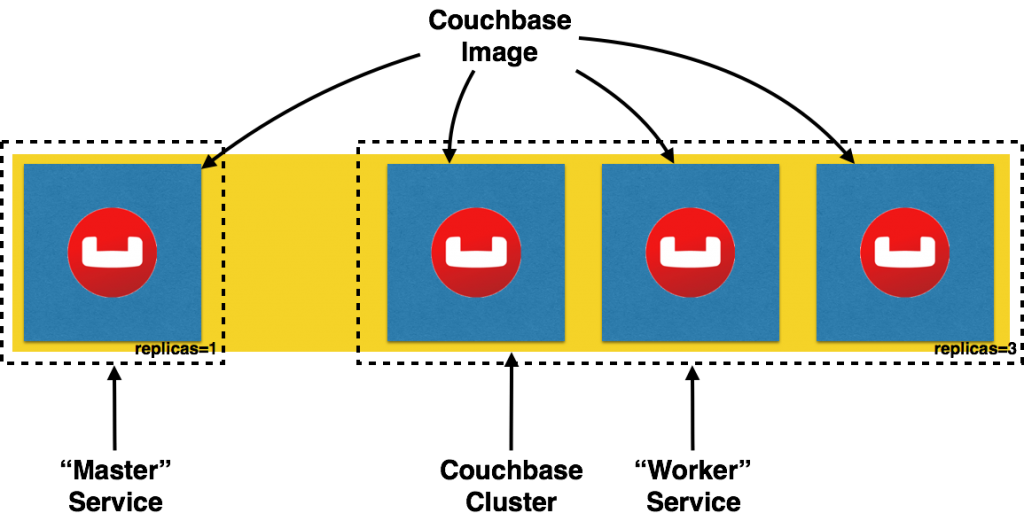 The master service has only one replica. This provides a single reference point to start the cluster creation. This service also exposes port 8091. It allows the Couchbase Web Console to
be accessible from outside the cluster.
The worker service uses the exact same image as master service. This keeps the cluster homogenous which allows to scale the cluster easily.
Let’s get started!

In addition to creating a cluster, Couchbase Server supports a range of high availability and disaster recovery (HA/DR) strategies. Most HA/DR strategies
rely on a multi-pronged approach of maximizing availability, increasing redundancy within and across data centers, and performing regular backups. Now that your Couchbase cluster is ready, you can run your first sample application.
Learn more about Couchbase and Containers: