NextAll The Small Things – JVM Profiling Lessons From The Trenches

In the Couchbase Mobile 102 session, we explored Sync Gateway in depth on its features and on “How to Add Secure Sync to your Mobile Applications”  by securing the Grocery Sync sample application which can be found on the Github repo for iOS and Android.  In this blog, we will walk through what was discussed on Sync Gateway, which is the component that ties together Couchbase Lite and Couchbase Server; you may reference the slides on the topic and code snippets that are outlined below.

One area that Sync Gateway helps resolve is data replication and this is regarding on how data is synchronized back and forth from the cloud to your mobile application on device.  The authentication of your users before replication can occur is another key area that Sync Gateway addresses upon which the data partitioning happens.  Once the replication is in place, data would need to be partitioned accordingly for your users to determine where specific data will be distributed.  And then there is data access control where given a user that has been authenticated, Sync Gateway may help with setting up the read and write permissions accordingly.  Let us explore each of these in more detail.

Facebook Authentication:  Sync Gateway Configuration
The code snippet below illustrates how to configure Facebook for Sync Gateway.
In the configuration file, we defined that we want to use Facebook as the authentication provider.  Beyond this point, Sync Gateway will be doing the work to communicate to Facebook to authenticate the token for the clients.
Custom Providers Authentication:  Communication Path
To implement a custom provider where an user base exists in an LDAP server setup is where the mobile application points to the app or auth server first.  The auth server is then responsible for authenticating users where once it successfuly authenticates an user, the auth server would make an API call to Sync Gateway admin API in the second step to get a valid session for that user.  That session token then gets routed back to the auth server and then returned back to the mobile client.  The third and last step once the mobile application obtains the token is then to communicate to Sync Gateway directly using the session token to obtain all the data required for the user on the device.
[2]  Data Read and Write Access

A lot of the security questions are in the form of how we manage read and write access.  Sync Gateway allows for defining fine-grain security policies for read side policies at the document level and then define the write side policies down to the field level.  The general policy enforcement framework is based on a Javascript Sync function where it is flexible to define complex security rules to extend out the mobile application running Couchbase Lite.

The function is defined in the Sync Gateway configuration file where the method signatures are taking the current revision of the document, doc, and the previous revision, oldDoc.  The body of the method is where the security rules are defined based on those two inputs.  This is where a simple basic Sync Function may first be defined and then slowly more advanced security rules may build out to cover all the cases.  With this approach, we can modify the sync function as new document types are defined or if there are an changes to the JSON schema.

With the write-side security, we are able to determine if a particular document that is coming from a known user may be written to the backend store or not.  For the Sync Gateway, there are four key methods in the Sync Function to use for write-side permissions:

With the read-side security, we are able to use “Channels” for data partitioning through the use of the ‘channel()’ primitive for documents while users get assigned to different channels using the ‘access()’ primitive.  The concept here is that every document gets associated with a set of one or more channels and that every user role has a set of channels that they can read. 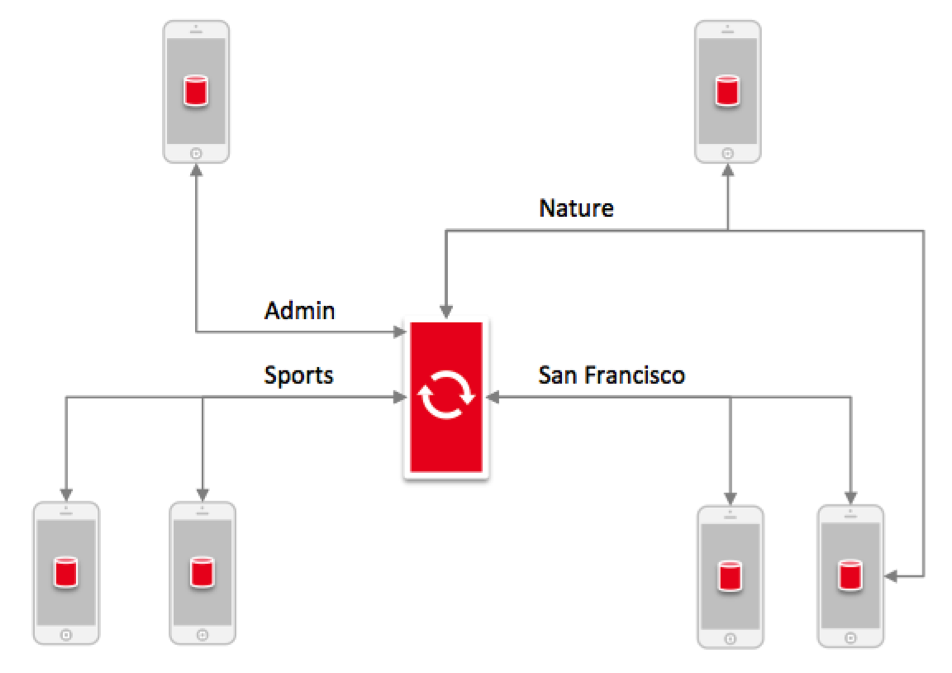 A particular channel will become into existance as soon as the channel command is used to assign an user to a channel.  At that point, the user will be looking for documents that is tagged with the same channel name.  There exist two special channels with the star [*] and exclamation [!] parameters.

In the following example, we will explore using the features described above on how to secure the Grocery Sync Application from the Couchbase Mobile 101 session where it exists as a completely unsecured application with no privacy.  Iterating with Sync Gateway, users will end up seeing only their own items as oppose to seeing the same list where all the available items that are added.

The starting configuration file for Sync Gateway is where nothing is switched on and is the default setting that comes with the Grocery Sync application.  We also enable the guest user so that the user has access to all the channels which means we will see all documents and new items that are added.  The first thing to adding security is to have users to authenticate which is what we will implement below.
The idea is to identify individual users that are part of the application and use that as a security measure within the app.  The update to the config file is creating users Alice and Bob.  We remove the Guest account and use Basic Authentication by pre-defining two users where initially the users have access to all channels.  Now with users created, we want to create a custom sync function to allow for defining the read and write security logic for the users in the app.
We now add a placeholder Sync Function and this is where the we will focus and continue to iterate on the logic to provide access control for the users on the data in the system.  Next we will further secure the channels by providing specific channel names.
Now we will give users access to their own items channel in the sync-gateway config by removing the [“*”] star for the admin-channel and add a new private channel that is specific to the user such as in the case here, “items-alice.”  Previously with the [“*”] channel, it allowed users to see all the documents in the system and we do not want that as a security measure.  We do the same for ‘Bob’ as well by setting the ‘admin_channels’ to be specific to “items-bob.”  By doing so, we will have items only accessible to their owners so we need to link the owner field in a grocery item document to the owner personal items channel accordingly.  Next, we will further modify the sync function for that to occur.

When a document is being written into Sync Gateway, we assign it to a channel where the channel name is of the form of “items”-prefixed with the value of the owner property from within the owner document that is obtain by “doc.owner.”  The previous configuration is when the document property is set to ‘bob’ and the ‘items’ would then be assigned to the ‘items-bob’ channel.  The user, “bob” has access to the “items-bob” channel and basically that is the channel that Bob has been given access to in his user record.  Now any item that has owner ‘bob’ as a property will be seen through that channel by Bob himself but it will not be seen by Alice cause it will not be in the ‘items-alice’ channel.  What occurred in the configuration is that we assigned a document to an appropriate channel and also programmatically gave access to the owner through their owner “items-” channel.

So now users can only see/read their own items and effectively their own grocery lists.  But they can still write to each other’s list cause Bob could upload an item and set the owner property to be “Alice” where in effect, Bob may easily infratrate Alice’s Grocery list.  The next step in adding security is to make sure that when a document comes in, we would have the owner-property match with the current authenticated user.

[3]  Data Transport on the Wire

Now, aside from the authentication and data read/write for user access concerns with security, the next topic is to ensure your data is secured going on the wire to a remote endpoint.  Sync Gateway supports SSL and TLS on the transport.  It is straight forward to configure within the Sync Gateway config file to enable SSL on Sync Gateway for your mobile app to have additional data security.

Sync Gateway is really the piece that glues together Couchbase Lite, the framework that lives on the embedded device. You have your Couchbase Server running in the cloud and Sync Gateway ties those together.  Sync Gateway has a handful of key functions that it provides to turn an application that is running on your local device, which is a standalone disconnected application into a fully feature multi user synchronizing experience.  What is shown above is how we can serialize things in the database by iterating on the Sync Function configuration file.