This is the last blog post in this series introducing Couchbase to ASP.NET developers (or vice-versa, depending on your point of view :). I’ll be rounding out the sample app that I’ve been building with a full suite of CRUD functionality. The app already shows a list of people. After this post, you’ll be able to add a new person via the web app (instead of directly in Couchbase Console), edit a person, and delete a person.

Before I start, a disclaimer. I’ve made some modeling decisions in this sample app. I’ve decided that keys to Person documents should be of the format “Person::{guid}”, and I’ve decided that I will enforce the “Person::” prefix at the repository level. I’ve also made a decision not to use any intermediate view models or edit models in my MVC app, for the purposes of a concise demonstration. By no means do you have to make the same decisions I did! I encourage you to think through the implications for your particular use case, and please feel free to discuss the merits and trade-offs in the comments.

In the previous blog posts, I added new documents through the Couchbase Console. Now let’s make it possible via a standard HTML form on an ASP.NET page.

First, I need to make a slight change to the Person class:

I added an “Id” field, and marked it with the [Key] attribute. This attribute comes from System.ComponentModel.DataAnnotations, but Linq2Couchbase interprets it to mean “use this field for the Couchbase key”.

And I’ll link to that with the bootstrap navigation (which I snuck in previously, and by no means are you required to use):

Since that form will be POSTing to a Save action, that needs to be created next:

Notice that the Person type used in the parameter is the same type as before. Here is where a more complex web application would probably want to use an edit model, validation, mapping, and so on. I’ve omitted all of that, and I send the model straight to a new method in PersonRepository:

This repository method will set the ID, if one isn’t already set (it will be, when we cover ‘Edit’ later). The “Save” method on IBucketContext is from Linq2Couchbase. It will add a new document if the key doesn’t exist, or update an existing document if it does. It’s known as an “upsert” operation. In fact, I can do nearly the same thing without Linq2Couchbase:

Now, I want to be able to edit an existing person document in my ASP.NET site. First, let’s add an edit link to each person, by making a change to _person.cshtml partial view.

Again, I’m using bootstrap here, which is not required. I also added a “delete” link while I was in there, which we’ll get to later. One more thing to point out: when creating the routeValues, I stripped out “Person::” from the Id. If I don’t do this, ASP.NET will complain about a potentially malicious HTTP request. It would probably be better to give each person document a more friendly “slug” to use in the URL, and maybe to use that as the document key too. That’s going to depend on you and your use case.

Now I need an Edit action in HomeController:

I’m reusing the same Edit.cshtml view, but now I need to add a hidden field to hold the document ID.

Voila! Now you can add and edit person documents. 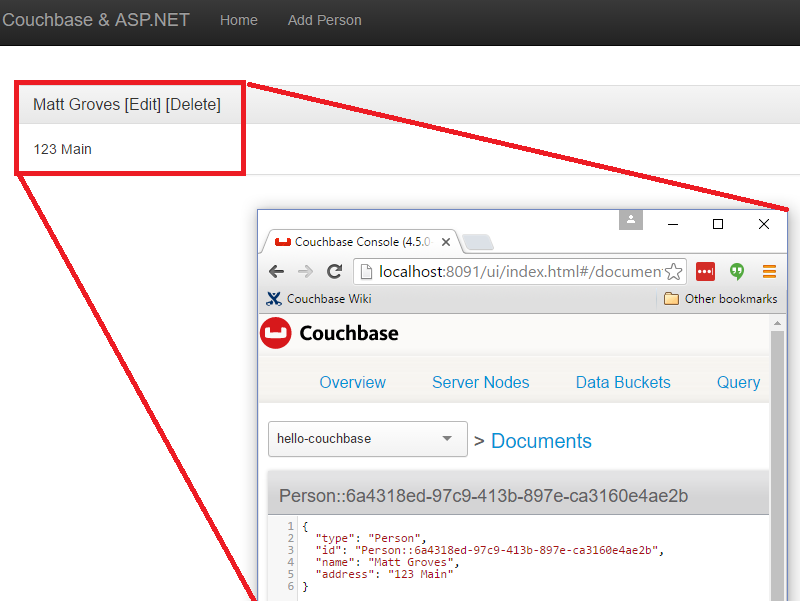 This may not be terribly impressive to those of you already comfortable with ASP.NET MVC. So, next, let’s look at something cool that a NoSQL database like Couchbase brings to the table.

Iterating on the data stored in the person document

I want to collect more information about a Person. Let’s say I want to get a phone number, and a list of that person’s favorite movies. With a relational database, that means that I would need to add at least two columns, and more likely, at least one other table to hold the movies, with a foreign key.

With Couchbase, there is no explicit schema. So instead, all I have to do is add a couple more properties to the Person class.

I also need to add a corresponding UI. I used a bit of jQuery to allow the user to add any number of movies. I won’t show the code for it here, because the implementation details aren’t important. But I have made the whole sample available on Github, so you can check it out later if you’d like. I also need to make changes to the _person.cshtml to (conditionally) display the extra information:

And here’s how that would look (this time with two Person documents): 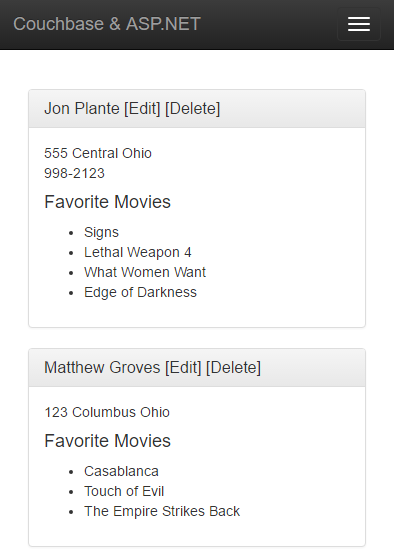 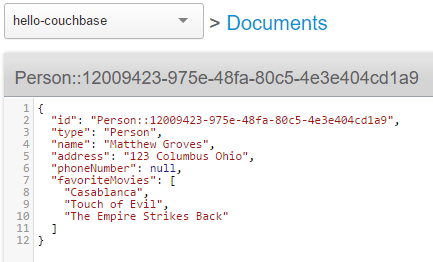 I already added the “Delete” link, so I just need to create a new Controller action…

…and a new repository method:

Notice that this method is not using Linq2Couchbase. It’s using the Remove method on IBucket. There is a Remove available on IBucketContext, but you need to pass it an object, and not just a key. I elected to use the IBucket, but there’s nothing inherently superior about it.

Thanks for reading through this blog series. Hopefully, you’re on your way to considering or even including Couchbase in your next ASP.NET project. Here are some more interesting links for you to continue your Couchbase journey:

I’ve put the full source code for this example on Github.

What did I leave out? What’s keeping you from trying Couchbase with ASP.NET today? Please leave a comment, ping me on Twitter, or email me (matthew.groves AT couchbase DOT com). I’d love to hear from you.

Posted by The Couchbase Team

Jennifer Garcia is a Senior Web Manager at Couchbase Inc. As the website manager, Jennifer has overall responsibility for the website properties including design, implementation, content, and performance.