Getting Started with Docker for AWS and Scaling Nodes

This blog will explain how to get started with Docker for AWS and deploy a multi-host Swarm cluster on Amazon.

Many thanks to @friism for helping me debug through the basics!

Are you packaging your applications using Docker and using boot2docker for running containers in development? Then you are really living under a rock!

It is highly recommended to upgrade to Docker Machine for dev/testing of Docker containers. It encapsulates boot2docker and allows to create one or more light-weight VMs on your machine. Each
VM acts as a Docker Engine and can run multiple Docker Containers. Running multiple VMs allows you to setup multi-host Docker Swarm cluster on your local laptop easily.

Docker Machine is now old news as well. DockerCon 2016 announced public beta of Docker for Mac. This means anybody can
sign up for Docker for Mac at docker.com/getdocker and use it for dev/test of Docker containers. Of course, there is Docker for Windows too!

Docker for Mac is still a single host but has a swarm mode that allows to initialize it as a single node Swarm cluster.

What is Docker for AWS?

So now that you are using Docker for Mac for development, what would be your deployment platform? DockerCon 2016 also announced Docker for AWS and Azure Beta.

Docker for AWS and Azure both start a fleet of Docker 1.12 Engines with swarm mode enabled out of the box. Swarm mode means that the individual Docker engines form into a self-organizing, self-healing swarm, distributed across availability zones for durability.

Click on Launch Stack to be redirected to the CloudFormation template page. Take the defaults: 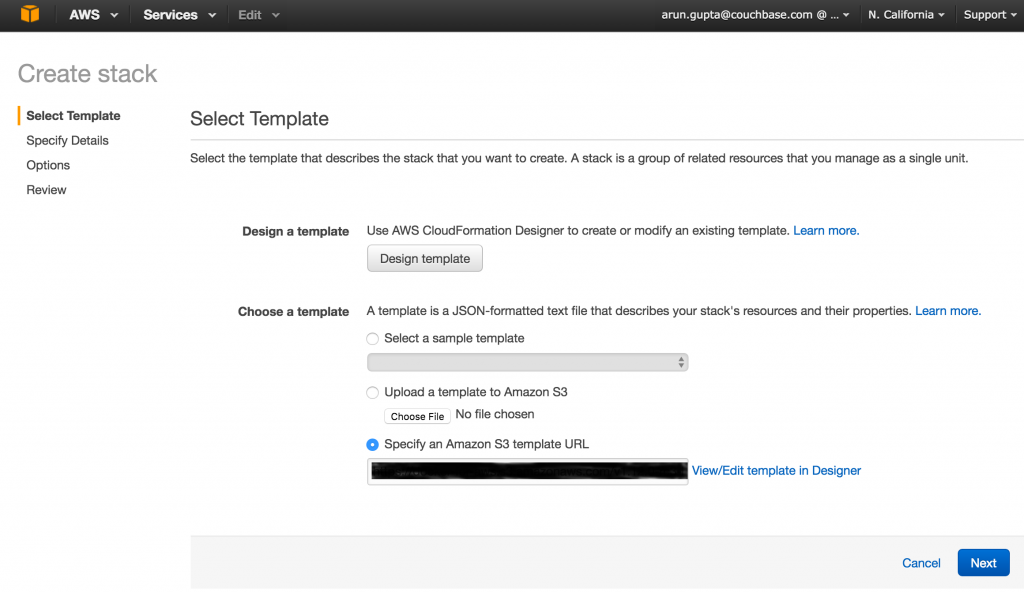 S3 template
URL will be automatically populated, and is hidden here. Click on Next. This page allows you to specify details for the CloudFormation template:

The following changes may be made: 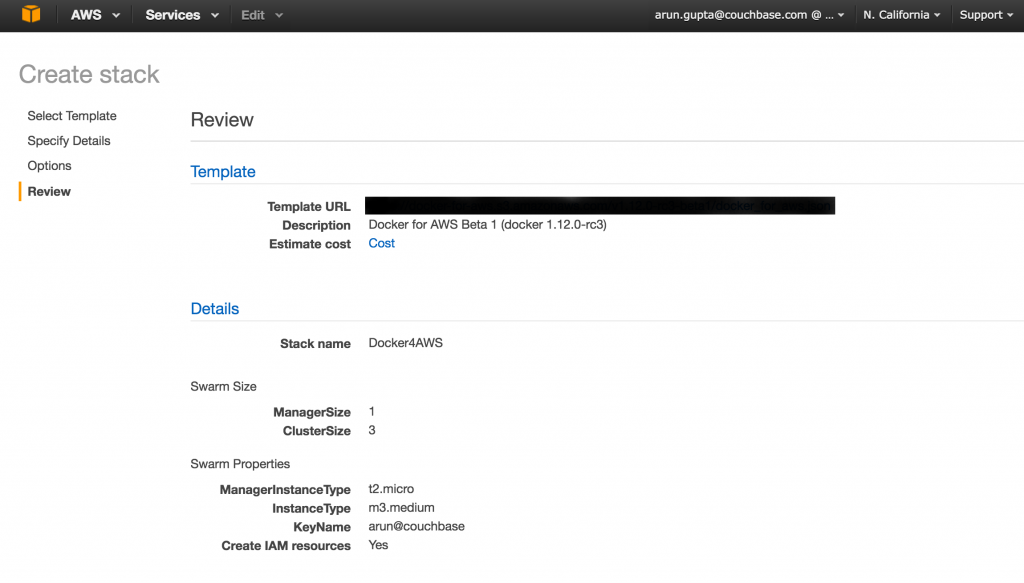 More details
about the cluster can be seen in EC2 Console: 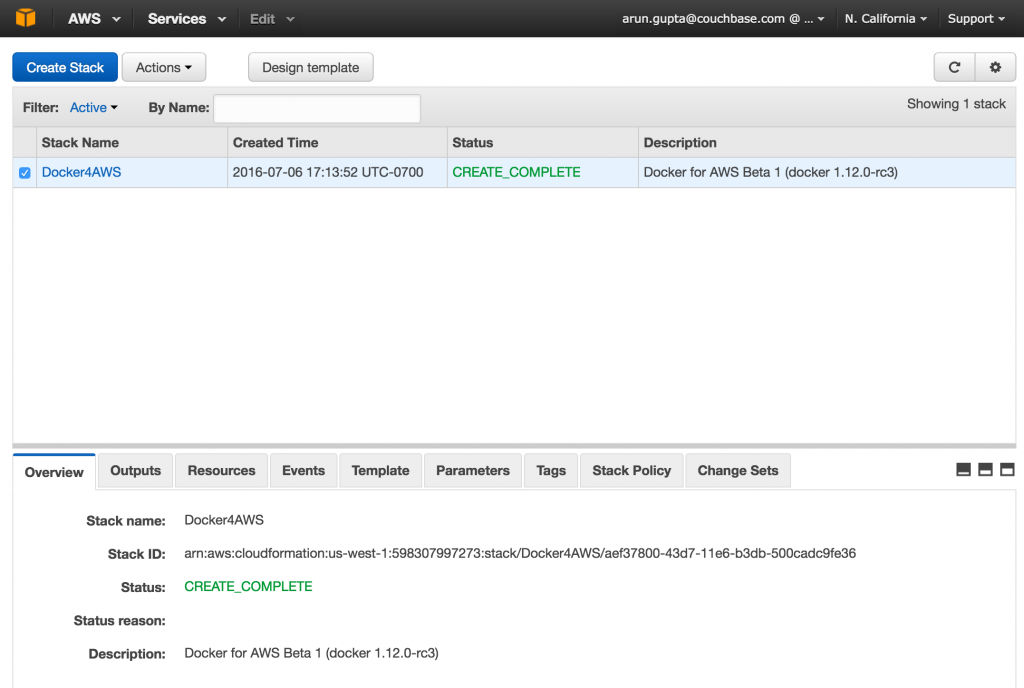 More details
about the cluster can be obtained in two ways:

Login using command shown in the Value column of the Output tab. Create a SSH connection as:

Note, that we are using the same key here that was specified during CloudFormation template. The list of containers can then be seen using docker ps command:

Alternatively, a SSH tunnel can be created as:

The list of containers can be seen as above using docker ps command. In addition, more information about the cluster can be obtained using docker info command:

Here are some key details from this output:

This first
release allows you to scale the worker count using the the Autoscaling group. Docker will automatically join or remove new instances to the Swarm. Changing manager count live is not supported in this release. Select the
AutoScaling group for worker nodes to see complete details about the group: 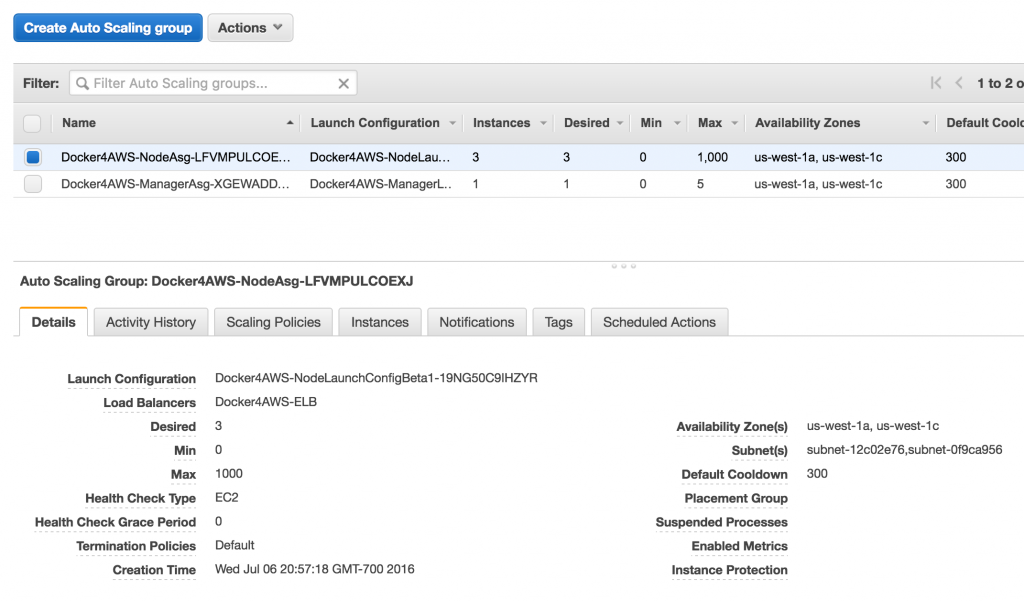 Click on Edit button to change the number of desired instances to 5, and save the configuration by clicking on Save button:

It takes a few seconds for the new instances to be provisioned and auto included in the Docker Swarm cluster. The refreshed Autoscaling group is shown as:

And now docker info command shows the updated output as:

This shows that there are a total of 6 nodes with 1 manager.