Couchbase on Amazon Marketplace showed how to setup a single Couchbase node using EC2 Console. But typically you provision these nodes en masse, and more commonly
create a cluster of them. Couchbase clusters are homogenous, scales horizontally and thus ensure that database does not become a bottleneck for your high performing application.

This blog will show how to create, scale, and rebalance a Couchbase cluster using AWS Command Line Interface (CLI).

Install the AWS CLI provide complete details, but here is what worked on my machine:

Authorize ports in the security group:

Note the key name as that will be used later.

This will show the output as:

Status of the instances can be checked as:

Here the status is shown as initializing. It takes a few minutes for the instances to be provisioned. Instances that have passed all the checks can be verified as:

At first, it shows the result as:

But once all the instances pass the check, then the results look like:

Here the status is shown as passed.

Each Couchbase node needs to be provisioned with the following details:

This can be done using the script:

This is available at: https://github.com/arun-gupta/couchbase-amazon/blob/master/configure-instance.sh. It can be invoked as:

Pick one of the IP addresses and access it at :8091 to see the output: Each Couchbase
node is configured with username as Administrator and password as password. Entering the credentials shows Couchbase Web Console:

Click on
Server Nodes to see that only a single node is in the cluster: All Couchbase server nodes are created equal. This allows the Couchbase cluster to truly scale horizontally to meet your growing application demands. Independently running Couchbase nodes can be added to a cluster by invoking the server-add CLI command. This is typically a two step process. The first step is to add one or more nodes. The second step is to rebalance the cluster where data on the existing nodes is rebalanced across the updated cluster.

This script is available at https://github.com/arun-gupta/couchbase-amazon/blob/master/create-cluster.sh and can be invoked as: 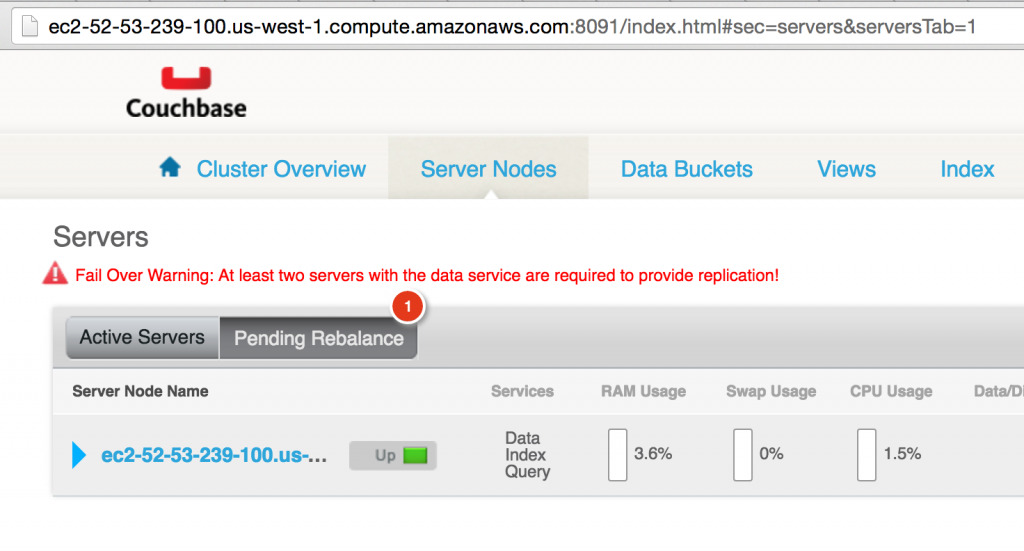 This shows the output as:

Once the cluster is up and running, try out Hello Couchbase Example.

This blog showed how to spin up, scale and rebalance a Couchbase cluster using AWS CLI. All scripts are available at https://github.com/arun-gupta/couchbase-amazon.