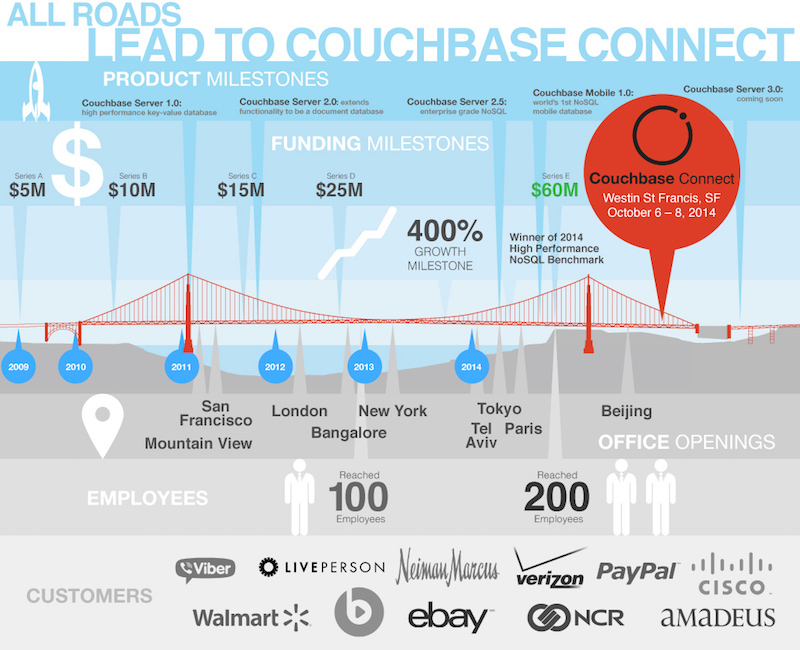 Mountain View, Calif. – June 26, 2014 - Couchbase, Inc., provider of the most complete NoSQL database, today announced a $60 Million series E round of financing. The round was led by two new investors, WestSummit and Accel Growth Fund and brings the total amount of Couchbase funding to $115 Million.   All existing venture capital investors also participated in this round of financing.

The new investment is further evidence of the growth of the global big data market which is segmented into two halves: operational data management, largely led by NoSQL vendors and analytical data processing, led by Hadoop vendors.  The operational data management segment of big data is starting to accelerate at a much faster pace, driven by large enterprise adoption of NoSQL.

“Global adoption of NoSQL for operational big data initiatives is just beginning.  Business have spent years trying to get Oracle to efficiently scale, or looked to MongoDB to experiment with small projects on non relational infrastructures,” said Bob Wiederhold, CEO Couchbase.  “But, as these companies become more dependent on applications that simply cannot perform or scale on MongoDB or Oracle, they are turning to Couchbase. That is because Couchbase Server is designed and built to deliver the scale and performance needed by next generation infrastructure.”

IDC predicts that the market for big data will reach $16.1 billion in 2014, growing 6 times faster than the overall IT market, with software accounting for 24% of the big data market.  While Hadoop drives the analytical segment of big data, NoSQL is the catalyst for operational data management. Rapid acceleration in the growth of the NoSQL market is driven by multiple factors, the biggest being enterprise adoption of next generation architectures that support big data initiatives.

“Accel is interested in finding the leaders for the big data market,” said Kevin Efrusy, Partner at Accel Partners.  “Couchbase is in a great position to disrupt the database market. It is building momentum with Oracle replacements and demonstrating continued competitive success over other NoSQL vendors.”

Couchbase is uniquely positioned to become the de facto general purpose NoSQL database of choice.  Its flagship product, Couchbase Server, is architected to consolidate multiple layers of functionality delivering the simplicity of a key value database, the flexibility of a document database and the read speed of an in-memory database.  This layer consolidation means Couchbase Server is singularly able to support multiple big-data use cases, making it an ideal choice for enterprises re-platforming for their next generation projects on a single infrastructure that is future-proof and cost effective.

Support for mobile applications is at the top of every IT agenda, and these mobile initiatives are evolving to include new requirements.  A typical mobile data strategy even a year ago, assumed that data would be kept in the cloud.  But now there is a shift happening at an accelerating pace, where data needs to be always available.  That creates a requirement for storing big data on a device, machine, wearable, etc. and being able to sync it with data stored in the cloud, or on other devices.

With its May launch of Couchbase Mobile, Couchbase leapfrogged the competition by delivering an end-to-end operational big data management platform that supports both cloud and edge based computing.  With Couchbase Mobile, enterprises have the ability to manage data via the world’s first and only NoSQL mobile database, and if needed, sync data to the cloud through Couchbase Sync Gateway. With its first-to-market NoSQL mobile database, Couchbase is positioned to take significant share of the huge mobile market.

Couchbase has experienced incredible growth over the past year.  Sales have increased 400%, the company has doubled its employee base, added 8 offices around the world and won strategic deals at large enterprise accounts.  Couchbase will use this new round of funding to further its lead in innovation, as well as enabling global enterprise adoption of NoSQL and big data initiatives.  This will include continued product investments, expanded regional technical support operations and scaling its marketing and sales teams.

Both investment funds are new to supporting Couchbase. Accel Growth III is a new $1 billion fund focused on investing in later stage companies that are driving important new trends in technology adoption.  WestSummit is funded by its partners located across the US and China.  Leveraging its strong global network, it focuses on helping build growth stage technology companies into global market leaders. Raymond Yang, co-founder and managing partner at WestSummit will join the Couchbase Board of Directors.

“Our investment in Couchbase is testament to our belief that organizations around the world are moving to next generation architectures,” said Raymond Yang, Co-Founder and Managing Partner at WestSummit.  “China, and broader Asia, represent a huge market, and we believe Couchbase is well positioned to take leading share of this opportunity.  As an investor and board member, I’m looking forward to supporting their APAC growth.”