NoSQL have been a reaction to relational movement that required rigid schema. Relational database bundled SQL query language to powerfully search and reshape the results to compensate. With version 4.0, Couchbase Server contains both the SQL gene and the NoSQL gene in its gene-pool! Couchbase Server with SQL has both the flexible data model with JSON Documents AND it has a powerful SQL language – N1QL, that is by far the most expressive language for JSON data. The combination of both JSON and SQL produces a powerful pairing to allow simplified programmability and powerful new enterprise applications that empower the new digital economy.

Why add a SQL Gene to Couchbase Server?

This is an easy question to answer:

With the new SQL gene in Couchbase Server, you are getting an expressive query language and query engine – N1QL, combined with a brand new powerful indexing mechanism – the new global secondary indexes.

This should look familiar to many of you. This is N1QL:

Cannot tell the difference between the relational SQL you know and Couchbase N1QL? Don't worry… They are very close cousins. However underneath there is a lot that is unique to N1QL.

Lets take a more detailed look at these 3 unique properties of N1QL.

Relational SQL operates over tables and columns and needs a strict schema. With N1QL, all queries are executed over JSON data in Couchbase Server. You don't have to deal with a strict tables and columns structure OR worry about changing schema as your data model evolves.

N1QL will adapt to the schema the JSON documents present as they get created and updated in your Couchbase Server bucket. Unlike SQL in relational databases, attributes like quantity or price that are referenced above can be missing. You can express your query either to disqualify documents that do not contain the attribute OR you can query the attribute only when it exists.

Another important difference is that N1QL delivers JSON result-sets an lets you shape the JSON with powerful operators like JOINs NEST and UNNEST.

For those of you using classic reporting, data visualization or ETL (extract-transform-load) tools: good news is that you can get high fidelity ODBC and JDBC drivers that give you seamless integration with a “rows and columns” style resultset from N1QL. Thanks to Simba ODBC and JDBC drivers, you can use your favorite tools like Tableau, Excel or PowerBI tools with the ODBC/JDBC drivers to integrate your full data lifecycle story together.

GSI bring in a new powerful indexer in addition to the View and Spatial indexers with incremental map-reduce in Couchbase Server 4.0. GSI capability is purpose built for N1QL and for big data applications with high rate of queries. GSIs achieves the great performance boost with a unique architecture which minimize the effects of wide scatter-gathers for processing queries.

GSIs come with independent partitioning and scalability with Multi-dimensional Scaling (more on MDS later). GSI is also built on a foundation of a strong storage and caching engine called ForestDB.

In the figure below, the left and right side shows the rough steps of execution of a common query. 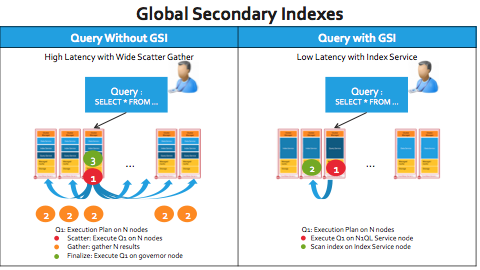 The way to manage GSI should be very familiar if you have worked with relational indexes before.

To explain multi-dimensional scaling, lets start from the high level server architecture: With Couchbase Server 4.0, each node contains a cluster manager, data, index and query service components as well as the storage engine and managed cache. 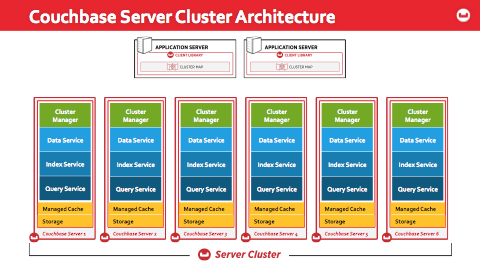 Here are the details on each component:

Even though every node contains the identical set of components, with the new scalability model, you can elastically turn on/off the services in blue on each node and create “zones” that independently scale services such as data, index and query operations and pick the best HW design per zone based on your workload.

You can still deploy the cluster the way you do today with Couchbase Server 3.0 – pick a single HW setup for all nodes, enable all the services on all the nodes and distribute the load across all the nodes. This is your good old uniform horizontal scale out. However the work needed to be done on the nodes to do core data operations like fast GET/SETs vs maintain GSI Indexes vs Process N1QL Queries all have competing requirements. Sharing the same node does not always make sense if you are sensitive to latencies of your operations.

The added model of multi-dimensional scalability allow you to divide the cluster into “zones” that run individual services (data, query and index) and in turn, allow independently choice of the HW for each zone. You can choose the best HW that goes with the type of indexing and querying you want to do and still maintain low latency in your core GET/SET operations.

In the figure below, the cluster has 3 zones that separate data, index and query services. Gray boxes represent services that are disabled on a given node.

There is more… much more…

We scratched the surface of N1QL and for a deeper view, you can download and play with the Release Candidate version of Couchbase Server 4.0.